Goblin Valley State Park is home to thousands of small mushroom-shaped hoodoos that can seem to resemble goblins.  The park is in a remote section of Utah between Green River and Hanksville about 10 miles off state route 24.  It is surrounded by BLM land near the San Rafael Swell and northeast of Capitol Reef National Park.

Goblin Valley was probably discovered by ranchers who lost their cattle in this intriguing landscape.  Three distinct rock layers that formed during the Jurassic as much as 170 million years ago make up the park with the hoodoos in the lowest Entrada layer.  The uneven hardness of the sandstone led to erosion by wind and water until the hoodoos formed. 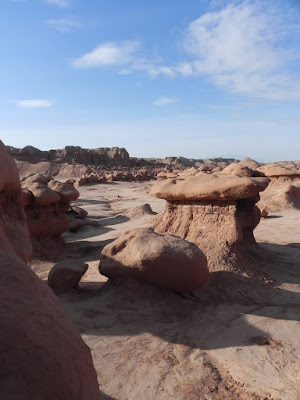 There are three trails that go to vantage points, but most people drive to Observation Point, where you can walk freely among the hoodoos, but there are no trails.  You can walk around endlessly throughout these formations, marveling at the odd shapes.  The park can be divided into three interconnected valleys of hoodoos, but only the northern end of one valley is easily accessible. 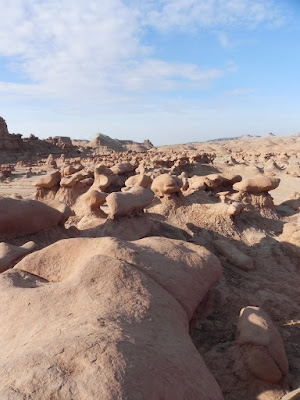 Vegetation among the hoodoos is nearly nonexistent, and the landscape is very dry and barren.  There are few plants and animals found within the park, mainly at higher elevations. 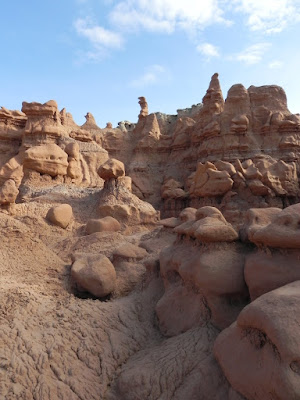