The tracks are only visible in the river bed where the water has eroded the overlying soil to expose the tracks. However, once these tracks have become exposed to the water, the erode relatively quickly, compared to the millions of years that they have been covered. Some of the tracks from the park are now on display in the American Museum of Natural History in New York. 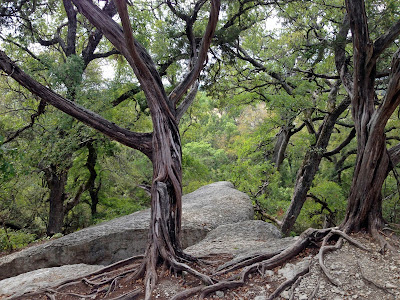 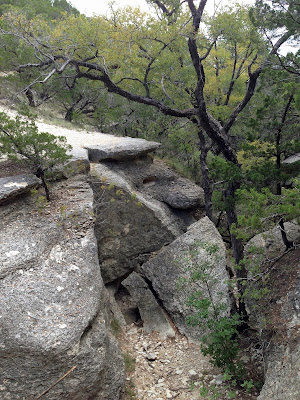 The park also has models of dinosaurs that were displayed at the 1964 World's Fair in New York. Several miles of hiking trails cross the hills and valleys across the river from the park's main facilities, and this area also supports populations of the endangered black-capped vireo and golden-cheeked warbler.

I did two look hikes during the afternoon that I visited, and both started at the main hiking parking area on the east side of the park near the campground. The first hike crossed the river on the Cedar Brake Trail, and then followed the White Trail to the Blue Trail along the bluffs above the north side of the river. The Blue Trail eventually connects with the Green Trail before arriving at the two main dinosaur trackways on the west side of the park. I followed a the river bed back a ways in the direction I came from before following a combination of an official and unofficial trail along the south side of the river back to the trailhead.

The second loop I took went across the river at the same point as the first hike, but then continued on to the White/Blue Trail to junction, which I followed on a ridge past an overlook and several backcountry campsites. After nearly one mile on the ridge, I turned onto the White Trail and descended into Danio Creek, which is really just a wash with a few puddles in it. The trail follows the wash back to the junction of the white and Blue Trails along the creek before going back to the trailhead. The total length of this loop was about 2.7 miles. There were a couple interesting rock formations along the stream and somewhat of a view above and along the river, but otherwise there wasn't much to this trail.